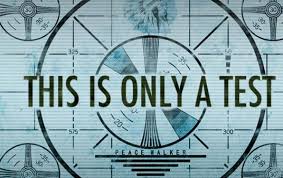 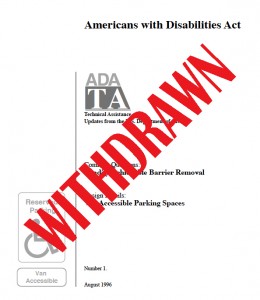 Attorney General Sessions’ withdrawal of various ADA guidances is good news for business, but only in the mildest way. Yesterday we looked at the withdrawal of two old guidances regarding service animals. Both were slightly out of date and their withdrawal did not make any substantive change in the requirements for businesses. Today we look at withdrawn guidances concerning accessible facilities and reach the same conclusion. Tomorrow we’ll look at the last of the ADA materials withdrawn, a guidance from the closing days of the Obama administration whose withdrawal may indeed have real consequences for state and local government.

The withdrawn guidances that include accessible facilities are:

END_OF_DOCUMENT_TOKEN_TO_BE_REPLACED

Quick Hits – He’s making a list and checking it twice.

ADA forum shopping – another problem with the internet.

Access Now, Inc. v. Otter Products, LLC, 2017 WL 6003051 (D. Mass. Dec. 4, 2017) points out one of the many problems created by the thoughtless application of the ADA to websites – the potential for forum shopping.  Massachusetts is one of the most favorable venues for ADA website cases because its federal courts have held that all websites are subject to the ADA regardless of their connection to a physical place of business. In Otter Products the plaintiff lived in Massachusetts and had no difficulty persuading the Court that it could exercise jurisdiction over the defendant based on product sales over the internet to Massachusetts residents. The possibility of being sued in almost any state comes with doing business nationwide. The problem with ADA lawsuits is that while we have a single federal law there is no single federal standard for determining which websites must be accessible or what accessibility means. This means plaintiff’s law firms will be choosing where to file suit based on an agenda that may bear little or no relationship either to real accessibility or what Congress intended. Businesses with nationwide sales may as well accept that every website must be accessible (because that is what the most liberal courts have held) and that website accessibility will mean whatever they lack (because that is the allegation needed to get past a motion to dismiss). END_OF_DOCUMENT_TOKEN_TO_BE_REPLACED

The nightmare before Christmas – ADA violations where everything is not enough. 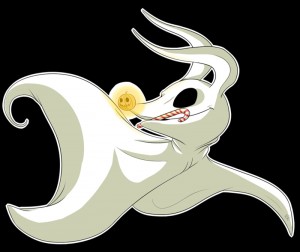 Brooke v. A-Ventures, LLC, 2:17-CV-2868-HRH, 2017 WL 5624941, at *1 (D. Ariz. Nov. 22, 2017) is a case with an unusual procedural posture and a holding that shows a frightening misunderstanding of issues concerning website development. According to this judge, making a website accessible is an admission of an ADA violation and a business website can never be fixed so well that a case against it is moot. END_OF_DOCUMENT_TOKEN_TO_BE_REPLACED 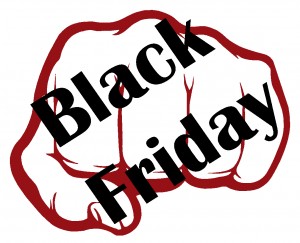 Black Friday is approaching. In honor of the annual sales we’ve collected a bevy of cases containing helpful lessons for any business subject to the ADA or Fair Housing Act.
Siler v. Abbott House, Inc.,  2017 WL 5494989 (S.D. Fla. Nov. 16, 2017) teaches a simple lesson for HOA’s: call your lawyer before you do anything concerning a disabled tenant or resident. In this case the prospective tenant was, it seems clear, treated very badly by a condominium home owners association. The conduct went from merely improper (questions about her obvious disability and need for personal assistants) to just spiteful (moving an access button to make sure she couldn’t reach it). Despite a later letter from the HOA’s lawyer apologizing and trying smooth things over the Court refused to dismiss the tenant’s claims for damages and attorneys’ fees. This isn’t a final victory for the plaintiff, but it guarantees the HOA will spend tens of thousands of dollars in legal fees if it doesn’t settle. Every HOA needs a clear set of policies regarded disabled tenants, and if those policies don’t exist, the Board should not act without first calling a lawyer. END_OF_DOCUMENT_TOKEN_TO_BE_REPLACED