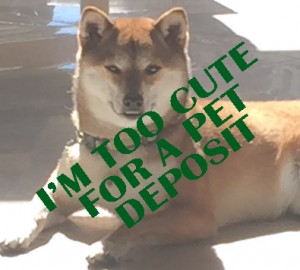 The October 17, 2017 decision by Judge Amos Mazzant of the Eastern District of Texas in Houston v. DTN Operating Company et al., 2017 WL 4653246 (E.D.Tex 2017) is good news for landlords confronted by bogus internet diagnoses of disability. There is a vexing lack of authority concerning just what constitutes sufficient evidence of a disability to require a landlord to allow an emotional support animal, and Judge Mazzant’s opinion makes it clear that the kind of letter typically purchased on the internet (or supplied by local physicians who don’t understand the law) won’t do.

The plaintiff provided her landlord with three pieces of evidence concerning her supposed disability. The first was a letter from a licensed marriage and family therapist. It stated only that the plaintiff had a mental disability and needed a support animal. The second was a follow up letter that apparently added a statement that plaintiff met the definition of disability in the FHA and ADA without explaining why. The third was a registration with an internet company that specializes in selling legally meaningless certificates.

Judge Mazzant noted a fundamental deficiency in the two letters. Plaintiff did not identify a major life activity that was impaired by her mental illness and did not explain how her mental illness substantially limited that major life activity. Applying the standards in Iqbal the Judge had no difficulty finding the plaintiff had failed to plead a claim under the Fair Housing Act.

Although Judge Mazzant was considering whether the plaintiff had pled a prima facie case of disability discrimination it should be applicable in complaints filed with HUD and other fair housing agencies. HUD has, in the past, refused to impose any limits on the kind of evidence of disability it will accept. Based on its own early guidance* its investigators and intake personnel will accept almost anything as proof of disability, including letters purchased on the internet, letters from advocacy groups and even letters from dog trainers. Judge Mazzant’s opinion explains why a landlord should not be required to accept anything less than evidence identifying the mental condition, explaining how it substantially limits a major life activity, and explaining why the pet is necessary for the tenant to use and enjoy the premises; that is, why the tenant can’t live a normal or close to normal life without the pet. It should also justify a refusal to accept anything less than a diagnosis from a qualified physician or mental health professional as described in HUD’s own more recent guidance on emotional support animals.*

The simple fact is that accurate diagnosis of a mental impairment sufficiently serious to constitute a disability requires more than a few minutes of chat and a questionnaire. ** Typical internet letters will state only that the patient was examined, has a disability or mental impairment and has a disability related need for their pet.  Recently some internet providers have begun beefing up their letters by stating specifically that the patient suffers from depression or an anxiety disorder, but of course neither of these is necessarily a disability, as the courts have often recognized. There is also precious little evidence that emotional support animals do any real good for those with depression, anxiety or PTSD.*** The opinion in Houston v. DTN Operating Company will, we can hope, be noted by HUD and lead to a more realistic assessment of whether complainants with letters purchased on the internet or secured from a local GP are sufficient evidence of a disability.

** For more details on this you can review Richard’s article in The National Psychologist,  What is a disability anyway? or check our earlier blog Emotional Support Animals – Just Say “No” to Bogus ESA Letters.

*** See our blog Science v. HUD – science and business are the losers.

« Quick Hits – ADA and FHA news of note » When does a mental impairment become a disability? Let the jury decide