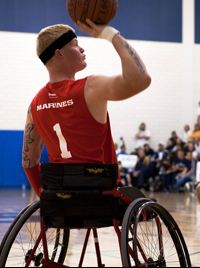 The liberal standing rules in the Ninth Circuit seems to benefit advocates for those with disabilities by allowing them to file suits that go far beyond any actual discrimination experienced by the plaintiff. However, this comes at a real cost because this kind of lawsuit encourages the courts and business owners to view “the disabled” as stereotypes rather than individuals. When the law treats everyone with a disability as an abstraction, it isn’t surprising if ordinary business people view the disabled in the same way.

Of course a plaintiff who acts as an advocate does not care about being typecast as both frail and helpless because it suits his mission. It is worth asking, however, what these cases do to those who would prefer to confront the world as who they really are rather than as a “disabled person” with no more soul than the stick figure on a universal access sign. When an individual advocate with a disability insists on the right to sue based on stereotypes it seems that the message they are sending to those with disabilities is: “you will always just be a guy in a wheelchair, because accessibility, which was supposed to ameliorate the effects of your disability, has become the definition of who you are.”

The cases also send a very unhelpful message to the business community. The ADAAG were the product of a lot of work aimed at making most public accommodations accessible to most people with disabilities. This necessarily involved compromises because people are individuals with individual strengths and weaknesses. Those compromises are reflected in standards that are ultimately arbitrary. A 5% slope isn’t magic. It is too steep for some people in wheelchairs, while for others an 8% slope would not present a problem. 5% was chosen to make the most sense for the most people.

This is necessary when setting standards for new construction, but when the guidelines are treated as a presumptive definition of an architectural barrier without regard to the abilities of the individual plaintiff their arbitrary nature becomes clear. The message to business is that the ADA does not require that they accommodate their actual customers or the needs of real people, but rather requires that they invest in the removal of “barriers” that may not make any difference to anybody. What should be a good business practice; that is, making it easy for customers to come in a buy, is presented instead as an arbitrary command to spend money on things that don’t appear to matter.

This isn’t to say that a disabled plaintiff can’t decide what constitutes a barrier to himself. It does mean, though, that a plaintiff should be required to claim that each individual barrier is in fact a barrier that obstructs his use and enjoyment of the premises. Without that individual allegation of an individual harm the lawsuit is just an excuse for enforcing an abstract policy on behalf of a class of individuals.

The end result of what the Ninth Circuit and other courts have done is the situation that exists today. Business organizations talk about “drive by” litigants and look for ways to defeat lawsuits instead of eliminating architectural barriers while litigation itself becomes a game whose goal seems to be looking for problems instead of looking for solutions. And, most important, “the disabled” stop being real people with real problems that need real solutions, and who have real abilities that can be tapped, instead become stereotypes associated only with lawsuits and expense.

« ADA pleading – can a plaintiff give fair notice of an ADA violation if he doesn’t know it exists? » Pre-suit notice in ADA litigation revisited.