From Sea to Shining Sea – how different courts deal with serial ADA lawsuits. 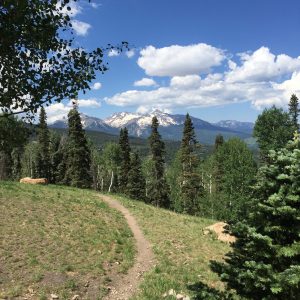 Today’s blog concerns a couple of cases reported to me by colleagues in California and New York. They give a snapshot of how courts at both ends of the country are thinking about ADA lawsuits. The snapshot at left is pretty much in the middle, near Telluride Colorado.

Welcome to the Hotel California

I was alerted to the California case, Whitaker v. ARS REI USA Corp., by Vaughn & Associates, who represent the defendant. The case illustrates the odd yin and yang of litigation in California, where the shifting tides of state law have altered the litigation landscape in recent years. To understand why requires a little background. California’s Unruh Act parallels the ADA but provides for statutory damages of $4,000 per violation. The ADA does not provide for damages, so an Unruh Act claim is better for the plaintiff. That damage remedy has driven ADA litigation at volumes that make California a clear leader in the number of ADA lawsuits filed if state and federal court cases are counted.

In response to the flood of ADA cases California passed its “high frequency litigant” statute, which creates some procedural hurdles for serial filers of cases involving physical barriers to access. Those procedural hurdles apply only in state court so they can be avoided by going to federal court.

The result seems to be that most ADA cases involving websites are filed in state court with steps taken to keep them from being moved to federal court. For technical reasons website cases don’t fall into the “high frequency litigant” statute and federal courts in California apply restrictions on the ADA’s application to websites that may be stiffer than those under the Unruh Act. Ordinary physical defect cases, on the other hand, continue to be filed in federal court to avoid the “high frequency litigant” statute.

This pretty obvious procedural gamesmanship seems to trouble some federal judges, and in recent months a group of them have ordered plaintiffs to explain why their state law claims under the Unruh Act should not be sent back to the state courts while the federal court considers only the federal ADA claims. Whitaker is such a case, and on Tuesday the 22nd the plaintiff filed its explanation of why it deserved to have its state law claim stay in federal court. The argument is worth looking at because it illustrates the hypocrisy of the supposed advocates for disability rights who seem to care more for their pocketbooks than accessibility.

The plaintiff’s principal argument is that the federal courts have procedures similar to those provided by the “high frequency litigant” statute, so it doesn’t really constitute a difference that matters. It is a peculiar argument given that the Unruh Act provides a remedy superior to any federal remedy and that Unruh Act claims can be joined to ADA claims in a state court proceeding. The plaintiff is trying awfully hard to stay in a court where it claims it has no particular advantage. The truth of course is that California state courts are harder for ADA serial filers. There is a $1000 additional filing fee for high frequency litigants that certainly matters. There is also a pleading requirement that requires more specificity than most serial filers care to give. Those details will eventually come out in federal court as well, but only after the defendant spends considerable money that it can never recover on attorneys’ fees. Finally, the state court early resolution procedures are triggered with less spending by the defendant, so even though they may be available in federal court, in state court the threat of high fees is reduced. ADA and Unruh Act settlements are driven by the high cost of defense, and plaintiffs want the cost of defense to be as high as possible so that defendants will be compelled to settle instead of fight. This is critical to the ADA litigation industry because in those rare cases that go all the way to trial defendants often win.

Serial ADA filers of physical access cases prefer federal to state court in California because they reduce their upfront expense to file suit and can manipulate the system to force the defendants to spend more money and therefore drive higher settlements. Such procedural shenanigans have a long history  that predates the ADA and Unruh Act, so not every federal judge has found this to be a problem. Some, including the judge in the Whitaker case, appear to think that justice rather than expedience should drive the outcome of lawsuits brought in federal court. One case is already on its way to the Ninth Circuit, which has an opportunity to give effect to California’s frequent filer law by permitting federal district courts to decline state claims brought in federal court as a means of evading state law.

UPDATE – On August 27, 2019 the Court dismissed the plaintiff’s pendant state law claims without prejudice, effectively forcing the plaintiff to go to state court with its damage claims. The Court’s reasoning was straightforward. California clearly wanted to stop abuse of the Unruh Act by high frequency plaintiffs and their lawyers. That desire was being thwarted by plaintiffs who filed suit in federal court to evade the state’s restrictions on filing. Because federal courts are not supposed to be in the business of thwarting state legislatures the Court found the necessary circumstances existed to decline supplemental jurisdiction. A clear step forward for ending abusive serial litigation, at least in California.

I was provided with the relevant papers in Andrews v. Exceeding Expectations, Inc. by defendant’s counsel, Maximilian Travis. Exceeding Expectations is a typical website accessibility claim brought by the Lee Group from New York. The order in question was a denial by the Superior Court judge of a defense Motion for Summary Judgment. The denial will, I understand, be appealed. I’ll leave a detailed analysis of the law to the Court of Appeals, but I was struck by a statement in the plaintiff’s Response to the Motion for Summary Judgment. The plaintiff’s lawyer wrote: “Instead of revising its Old Website to comply with the accessibility standards under the Americans with Disabilities Act (“ADA”), Defendant has since chosen to extensively litigate this lawsuit.” Let’s break that down. First, the reference to the Old Website is necessary because the website that was claimed to be inaccessible had been completely replaced by a new website. Whether the new website is accessible to the blind is a bone of contention it seems, but in any event a lawsuit over the accessibility of the old website is not a lawsuit about accessibility; it is a lawsuit about damages under New York state and municipal law. Does that sound like California? There’s a reason that the ADA litigation industry is booming in New York, and it isn’t because the state is a hotbed of ADA violations.

The next item in this sentence is the reference to “the accessibility standards under the Americans with Disabilities Act.” The plaintiff’s counsel is well aware there are no such standards, and whether a website illegally discriminates against a particular blind plaintiff depends not on compliance with any third party standard, but rather on its real effect on that particular plaintiff. This was the subject of my last blog,* and nothing illustrates the problem with applying technical standards instead of looking at real injury better than this statement. The foundation of the ADA litigation industry is the courts’ frequent willingness to allow claims based on the convenient fiction of discrimination based on technical standards while ignoring the reality that the plaintiff suffered no injury at all. My fifth blog, back in 2012, was titled “Standing on Air”** and called attention to the way cheap standing was fueling the ADA litigation machine. Three hundred blogs later the same problem continues although the legal tools to eliminate cheap standing have existed for decades.†

Finally we come to “chosen to extensively litigate this lawsuit.” That gripe absolutely sums up the position of most ADA plaintiffs and their lawyers. How dare you fight back or try to defend yourself when we are trying to make a quick buck with fast settlement? How dare you make us take the time and incur the expense to prove an injury or prove the website was not accessible? ADA plaintiffs’ lawyers are no different than any other lawyer and not withstanding their frequent claims to be advocates for all that is good and true they are mostly in it for the money. Defendants have as much right to put them to the test as they have right to file suit, and courts should judge cases based on the truth about what happened, not an imaginary white hat / black hat distinction between plaintiffs and defendants.

* I’m not providing a hyper-link because if you scroll down this page you’ll find it.

† The Superior Court, while denying the defendant’s motion for summary judgment, did appear to recognize that federal standing requirements might be at issue. Hooray for that recognition.

« ADA website accessibility litigation – confusion about standards is driving abusive litigation. » Stadium Sightlines under the ADA – the winner is . . .