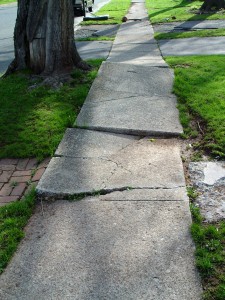 Does this look like a “service, program or activity?”  The official position of the Department of Justice is that every city facility – sidewalks, buildings and the like – must be made accessible because building and maintaining those facilities is a “service, program or activity” of the city. The Fifth Circuit agreed in what has been a leading case on this issue, Frame v. City of Arlington.  Now it appears this view is not unanimous. Just a month ago, in Babcock v. Michigan, 2016 WL 456213, (6th Cir. Feb. 5, 2016) the Sixth Circuit found that the Fifth Circuit was wrong, and that:

facility accessibility is not, standing alone, a cognizable claim under Title II’s private right of action; rather, the inquiry is tied to whether that facility’s inaccessibility interferes with access to public services, programs, or activities.
In Babcock the plaintiff’s claim was that the facility was not accessible rather than that some program or activity was not accessible. This meant, the Sixth Circuit found, there was no Title II private cause of action.
It has to be noted that this does not let every municipality off the hook for physical access to its facilities, even in the Sixth Circuit. The earlier authorities cited with approval by the Sixth Circuit agree that if physical access denies participation in a service or program then physical access problems have to be fixed.  City Hall, courtrooms, recreation centers and other places where the city provides its services must be accessible because otherwise the services themselves are not accessible. The real impact of the decision will be on sidewalks, roads, and in some cases parks that are for public use, but don’t necessarily provide a program or service. This is an important impact though, because a typical city has a lot more sidewalks than buildings. Sidewalks have played a large role in settlements with DOJ under its Project Civic Access, and this decision may give cities a little more bargaining power. It would also allow a city to move its programs and services to those facilities that are more easily made accessible, while leaving difficult to renovate older buildings for offices that are not commonly visited by the public.
It is too soon to know whether Babcock will go any further, but we now have a clear split in the Circuits concerning the interpretation of Title II. That means we have some possibility of a definitive ruling from the Supreme Court about the extent to which Title II requires that every city facility be made accessible. We’ve also got a good decision for cities outside the Fifth Circuit that may want to challenge a Title II lawsuit based on facility accessibility.

« Dialing for Dollars – Fair Housing advocacy or just a business? » Abusive ADA Litigation – the answer is local, not legal