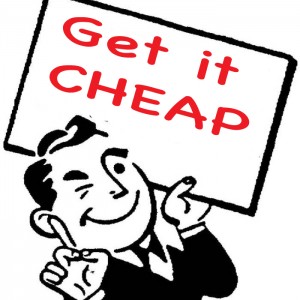 ADA serial litigation is possible only because of a judicially created doctrine of cheap standing. What do I mean by cheap standing? Standing that can be obtained at minimal expense and inconvenience. Serial litigation is economically feasible only because a plaintiff can obtain standing merely by seeing a non-compliant parking space and then leverage that standing to include still unknown ADA violations inside a business. Cheap standing makes it possible for a few law firms and their pet plaintiffs to file dozens or hundreds of lawsuits in a short period of time with such small expense that they can still make a substantial profit on the modest settlements that are usually demanded. Cheap standing is the foundation on which serial ADA litigation rests.

These plaintiffs do not suffer any real harm and now some courts are pushing back by enforcing the constitutional requirement that a plaintiff have a real redressable injury. The most recent of these cases is Brooke v. Peterson, 2016 WL 2851440 (C.D. Cal. May 13, 2016). In Brooke the plaintiff filed some 90 lawsuits based on her phone calls to various hotels inquiring about whether they had a pool lift. If the answer was “no” she filed suit. She never visited any of the defendant hotels, probably because she lives in Arizona and leaving her home or office would have diminished the number of hotels she could call and sue. The Court, after an extensive analysis of the existing cases, found that Ms. Brooke did not have standing because she had not suffered any injury. Even under the very liberal standards of the 9th Circuit she had to at least have personal percipient knowledge of the alleged barrier to access. That is, she had to at least see it herself. Based on this holding the Court dismissed all of cases filed by Brooke pending before it.

A case from Maryland, Nanni v. Aberdeen Marketplace, Inc., 2016 WL 2347932,  (D. Md. May 4, 2016) demonstrates a new, critical look at the intent to return element of standing in ADA cases.* This was a typical “drive-by” case; the plaintiff stopped at a shopping center, saw violations visible from the parking lot, drove away and sued. Like most complaints in these cases the allegations were generic, with no details of how the plaintiff encountered the alleged barriers to access. Taking this into account, along with the plaintiff’s history of filing similar lawsuits, the Court concluded that the allegations were not sufficient to raise more than a “mere possibility” of future harm. The Court also rejected the plaintiff’s argument that he was a “tester” and would return to the defendant shopping center to check for ADA compliance. It found that tester status could not create standing the individual did not otherwise have.

In March of this year a District Judge in Nevada reached a conclusion similar to that Brooke. In Meggs v. MHD Vegas Realty Corp., 2016 WL 1048014 (D. Nev. Mar. 10, 2016) the plaintiff alleged that he had “visited” the defendant Travelodge motel and provided a list of ADA violations, but did not allege that he had actually encountered the alleged barriers to access. The Court found that these allegations were insufficient to meet the requirements of Article III of the Constitution:

Driving by, or to the property, without staying in a hotel room or facing the allegedly discriminatory amenities, is not sufficient to meet the “case” or “controversy” requirement.

The discussion is not as thorough as that in Brooke v Peterson, but the Court reaches what is clearly the correct conclusion. A plaintiff cannot obtain standing by merely driving by a business and seeing a potential ADA violation.

Another recent case, Cross v. HFLP – Dolphin Beach, LLC, 2016 WL 3166911 (S.D. Cal. June 7, 2016) deals with a typical serial litigant who has filed hundreds of cases in California. She alleged ADA violations in the parking area for an apartment rental office. The Court found her allegations concerning standard were insufficient because, notwithstanding her statement that she often visited other businesses in the area, she could not plausibly allege that she had any reason to return to the apartment complex since there was no allegation she was moving or looking for an apartment.

These are the most recent of a relatively small number of cases pushing back against the kind of cheap standing that has encouraged exploitative ADA litigation. A decade ago the Ninth Circuit wrote:

For the ADA to yield its promise of equal access for the disabled, it may indeed be necessary and desirable for committed individuals to bring serial litigation advancing the time when public accommodations will be compliant with the ADA.

the true reason behind Plaintiff’s alleged intent to return to Defendant’s shopping center is to preserve and cultivate this legal action and secure legal fees.

Nanni, supra. These judges are pushing back against cheap standing because they understand that cheap standing has resulted in serial litigation that wastes both judicial and financial resources**. It is too early to call it a trend, but it is a hopeful sign that the courts will gradually stop allowing themselves to be used as a money making tool for a small number of plaintiff’s firms.

*Because the only relief available under the ADA is an injunction, and an injunction gives no relief to a plaintiff who won’t got back in the future, an intent to return to the defendant place of business is a necessary element of standing.

** Serial litigation wastes resources because in most cases more money is spent on lawyers than on ADA remediation. A typical drive-by suit will result in perhaps a thousand dollars worth of work to fix a slightly out-of-compliance parking space that never hindered access by any disabled person while plaintiff and defense legal fees run as high as $8,000 or more. The only beneficiaries are the lawyers.