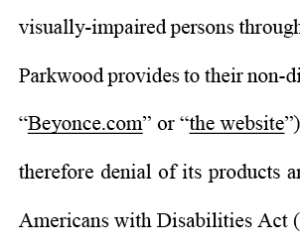 A lawsuit claiming that Beyoncé’s website is not accessible to the blind has gotten lots of coverage*, but the real news of importance to business is that the plaintiff – Mary Conner – has filed more than 20 similar suits in the last twelve months. She claims to be a passionate Beyoncé fan who wanted to buy a special hoodie, just as she has claimed to be a passionate Rihanna fan who wanted to buy a Rihanna hoodie, and as she claimed to want a Christmas tree from Christmascentral.com, and wanted some Honey Barbeque Jerky from Chefscutrealjerky.com, and wanted to book a workout at Barre3.com, and wanted to buy shoes from Marc Fisher footwear and so forth and so on. She’s such an enthusiast for Spanish food that she was anxious to get menu information about a restaurant in Washington D.C. even though she lives in New York. And the concern that has lead her to file so many lawsuits is so intense that she doesn’t use the same gender in the various complaints, sometimes referring to herself as a “he” and sometimes as a “her.”

The real news is that lawsuits by individuals who were not shopping for products or services, but rather shopping for a lawsuit, are costing businesses, whether owned by celebrities or owned by ordinary folks trying to make a living, tens of thousands of dollars in legal and settlement costs with no obvious benefit to the disabled. Ms. Conner’s many apparent settlements all appear to be confidential, making it impossible to know whether she is demanding any kind of change to the websites she sues, or is simply content to take the money and run.

Meaningful improvements in website accessibility can only come from the adoption of regulations that specify what accessible means and a provisions for private enforcement that require all settlements to be public with respect to both injunctive relief and attorneys fees paid. Until that happens the ADA will continue to be a tool used more often to make lawyers rich than to make the world more accessible for the disabled.

« Fourth Circuit decision in ADA web access case is a victory for all defendants. » Obesity and the ADA – What would President Taft think?