There’s a new kid on the block in the world of serial accessibility demands.** It’s not a boy band, its “Legal Justice Advocates.” They’ve been sending demand letters to apartment owners, mortgage lenders and real estate agents claiming to represent an outfit called “Victims Awareness, Inc.” which, they claim, is a “national not-for-profit” with disabled members “throughout the nation.” Victims Awareness, Inc., they claim, uses experienced testers (who are not claimed to be disabled) to check on the accessibility of websites. The firm then sends a demand requiring remediation of unspecified defects and money for the lawyers. After seeing a few of these and getting calls from lawyers who saw more I thought it would be worthwhile to take a longer look at the firm and its supposed client.

It appears that Legal Justice Advocates is less a law firm than a website, for all of its members are in fact partners in other firms. The “managing partner,” Yvette Harrell, is a Florida lawyer whose firm “Law Offices of Y.J. Harrell” is located in Wilton Manors, Florida and handles “Bankruptcy, Business, Family, Immigration, Real Estate.” Ms. Harrell’s office, according to the Florida State Bar, is in this house: 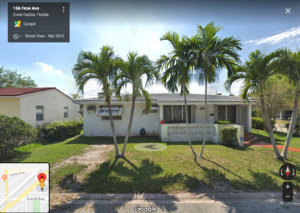 A different online directory puts her office in this building in Wilton Manors:

Two other lawyers listed as “local counsel” are the named partners in Stamoulis & Weinblatt LLC. Two more, listed as “of counsel” are the named partners in Polo Pimentel P.A.. Jerome Ramsaran, listed as “of counsel” is a solo practitioner doing business as the Ramsaran Law Group, and the last, Halina Cegielski, is the owner of the H Law Group according to LinkedIn. The role of the various lawyers isn’t always clear. Ms. Harrell sent almost all the demand letters I saw until around December 10, after which letters to defendants in Florida were signed by Ramsaran and Jean C. Polo. A few letters directed to clients incorporated in Delaware purported to be signed by Stamatious Stamoulis, but he has told me this was done without his authority. Another lawyer whose signature appears on demands sent to Texas firms, Ilya Torchinsky, had his license to practice law in Florida revoked earlier this year.

The “firm” seems to have been created only a year ago: Its internet domain name was registered in October of 2018. Despite its supposed mission concerning website accessibility the home page of the firm’s website has at least 46 WCAG 2.1 violations, including every kind of violation listed in the demand letters I have seen. Maybe they should send a demand letter to themselves.

Their supposed client, Victims Awareness, Inc. was first incorporated in Delaware in early July of this year. The firm claims Victims Awareness, Inc. is a national non-profit, but it does not appear to be registered to do business in any state other than Delaware. The first time I searched for it on Google in late November 2019 I didn’t find any  reference to such an organization or its website. Searching on December 20 the first listing was another law firm blog similar to this one. This blog also appeared, but nowhere on the first two pages did the supposed organization itself appear. A lawyer claiming to represent Legal Justice Advocates told me on December 19 that Victims Awareness does have a website at victimsawareness.org. I’ll let my readers follow that link and decide for themselves whether it looks like the website of a national disability rights organization. I will only note that the “about” page has this statement:

Victimsawareness.com is a dedicated social welfare information website, committed to providing information to individuals who have been harmed by negligent medical treatment, dangerous drugs, and dangerous medical devices.

It doesn’t sound like a disability rights organization to me. In any case, Delaware public records don’t show who the owners or managers are; it only names the service company that formed the entity and acts as its registered agent. I suspect it was created by Legal Justice Advocates or one of its affiliated lawyers for the sole purpose of sending demand letters.

What does all this mean for someone who gets one of these demand letters? The legal theories on which they are based are dubious, but more important it seems very unlikely that there is a person or organization with standing to sue or make a complaint with HUD. The supposed tester is not claimed to be disabled and would not therefore have suffered any injury at all. The organization seems to have been created to litigate and will probably not satisfy the standing requirements for organizational standing. No demand of this kind can be dismissed out of hand, but based on what can be found on the internet today Legal Justice Advocates seems to be in the business of sending form demand letters in hopes of making some easy money. Whether the “firm” can or will follow through on its threats only time will tell.

** Since I first published this blog an attorney claiming to represent Ms. Harrell and Legal Justice Advocates has called and threatened to take some further unspecified action against me. Another attorney associated with Legal Justice Advocates, Jerome Ramsaran, emailed and threatened to sue me for defamation. I have invited them, as I have invited Ms. Harrell, to identify any false statements I have made and show me they are false. Other than the website link above they have not provided anything so far.