ADA inventory and personal devices – who pays for a personal preference? 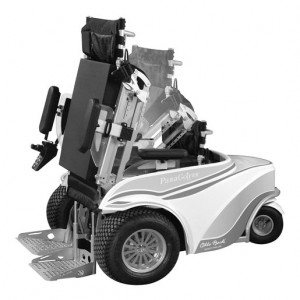 The picture on the left is of a ParaGolfer – a mobility device that helps the disabled user stand up to play golf or engage in other sporting activities. The base price is around $34,000, and a pair of recent decisions from California, Nevarez v. Sumavision SFO LLC, 2018 WL 827969  (N.D. Cal. Feb. 12, 2018) and Nevarez v. Canyon Lakes Golf Course & Brewery LLC,  2017 WL 5479649 (N.D. Cal. Nov. 15, 2017) suggest that every golf course in America may be legally obligated to buy one or more of them. These decisions raise an important question about the interaction of preference, necessity and equality in providing equal access for the disabled. The cases were wrongly decided based on sloppy reasoning, but before discussing the law let’s take a look at golf cart technology.

A little time on the internet reveals that the world of golf carts and aids for disabled golfers contains a number of different options at different prices. Here is the range I found:

I’m sure I’ve overlooked a brand and I don’t know anything about relative quality, but these seem to represent the range of options.

Now back to the cases. Both lawsuits were brought by the same disabled plaintiff, a disability rights advocate associated with a large plaintiff’s firm. He uses a wheelchair for mobility because he has one leg amputated above the knee with nerve damage to the other leg and arm. He also plays golf. In both cases he called a golf course to ask if they would provide him with a ParaGolfer as an alternative to a regular golf cart. Neither course had the device available and so he sued, claiming not only that he needed a device with a stand up feature like the ParaGolfer, but that it had to be a ParaGolfer because the Solo Rider brand was not good enough. The courts held in both cases that at the earliest stage of the case, before the facts were developed, they could not decide whether a golf course was required to provide a ParaGolfer. They looked at two issues:

Both cases show a lack of understanding of the inventory rule. 28 CFR §36.307(a) provides that a business need not “alter its inventory to include accessible or special goods.” At the same time 42 U.S.C. §12182(b)(2)(A)(iv) requires removal of architectural barriers when it is readily achievable. Implementing this statutory requirement, the Department of Justice adopted 28 C.F.R. § 36.304(b)(21), which lists installing vehicle hand controls as something readily achievable. DOJ states in the Technical Assistance Manual for Title III of the ADA that the barrier removal obligation might require a car rental agency to provide hand controls for its rental cars. This was part of a more general observation that it is readily achievable a business might be obligated “to take measures, such as altering the height of equipment controls and operating devices, to provide access to goods and services.”

However, DOJ’s interpretation of its rules is based on the idea that a business is renting the functionality of a piece of equipment rather than mere access to the equipment. For a temporary user, like someone renting a car or someone paying to use a laundry machine this has a kind of logic. The business is not selling the machine, but rather the use of the machine. In Funches v. Barra 2016 WL 2939165 (S.D.N.Y. May 17, 2016) a District Court expanded the DOJ’s interpretation to require that car dealerships temporarily install hand controls to permit test drives. It held that the modification was necessary if “making this temporary modification will allow disabled customers to access the full range of goods and services offered by the dealerships.” This argument was adopted by the Ninth Circuit in Karczewski v. DCH Mission Valley LLC, 862 F.3d 1006 (9th Cir. 2017), giving it considerably more authority, particularly in the Ninth Circuit, which includes the courts that decided the Nevarez cases.

Nonetheless, nothing in Karczewski or Funches justifies the leap made in the Nevarez. Nevarez does not require that a business make temporary modifications to give a disabled user the desired functionality; it suggests a business might be required to buy entirely new and different goods providing a functionality not present in the existing inventory. The Nevarez cases justify this by quoting just part of a regulation requiring businesses to order accessible or special goods “if the accessible or special goods can be obtained from a supplier with whom the public accommodation customarily does business.” The decisions ignore the rest of the regulation (28 CFR §36.307(b)), which provides in full that:

The decisions also misrepresent the holding and reasoning in Karczewski, which mentions §36.307(b) only long enough to say that it did not apply. Since golf courses do not normally make special orders for golf carts,  §36.307(b) is simply not applicable.

The last argument in the Nevarez cases concerning inventory is a passing reference to reasonable modifications in policies and procedures, the modification in this case being that the golf course buy the ParaGolfer. This is, of course, absurd. If buying or making accessible goods were a reasonable modification of an implied policy not to buy or make such goods the inventory exception would be meaningless. There is no regulation and no reasonable interpretation of the ADA that ever requires a business to buy and stock accessible goods when it does not regularly order similar goods for its customers. The Nevarez cases are wrong on the inventory issue.

The “personal devices” argument is equally wrong. Arguing about whether a Paragolfer is a “wheelchair” or an “adaptive golf cart” is the kind of language game lawyers play and courts should ignore. The regulatory definition of “wheelchair” in 28 CFR §36.104 is:

All these elements seem to apply to the ParaGolfer and Solo Rider, but the decisions in the Nevarez cases never look at the regulatory definition, a shocking oversight by either the lawyers or the judges or both that illustrates just how sloppy the reasoning in these decisions is. *

Turning finally to the “personal devices” provision found in 28 CFR §36.306, the Karczewski decision concludes that “personal devices” a business need not provide are “independently useful objects that a person possesses for a general purpose” in contrast to “specialized devices that must be installed or coordinated with a business’ system.” Neither the ParaGolfer nor the Solo Rider is a specialized device that must be installed or coordinated with a golf course; in fact, the advertising materials for both emphasize how many ways they can be used that have nothing to do with golf. In addition, the fact that standup wheelchairs are readily available makes it clear that standing up is generally useful for many individuals confined to a wheelchair. Most important, however, is Mr. Nevarez’s claim that the Solo Rider stand up device was not adequate for him. When the choice between two or more similar devices is a matter of personal taste the device is clearly personal. Neither decision appears to consider the holding in Karczewski or asks how a device that is chosen by preference could be anything other than a personal device.

The Nevarez cases were poorly reasoned and wrongly decided. Wrong decisions are not uncommon, of course, but in ADA litigation the denial of a motion to dismiss is often the end of the lawsuit. Even a ParaGolfer costs less than the legal fees likely to be incurred in defending the lawsuit, and by refusing to dismiss the cases these courts decided in favor of the plaintiff. That may have been the intent, but in any case these are the kinds of decision that drive the ADA litigation business and made lawyers rich without doing anything of material benefit to the disabled.

The ADA protects the right of individuals to have the access they need to make personal choices, but it does not require that businesses pay for those choices. This is the essence of the “personal device” exemption.  Whether you call the ParaGolfer and Solo Rider “wheelchairs,” or “adaptive golf carts” they are both undoubtedly independently useful objects that a person possesses for a general purpose and whose exact characteristics are a matter of personal taste or preference. Thus, nothing in the ADA requires that the cost of these devices be shifted from disabled individuals to the businesses they patronize. That is the conclusion the Nevarez cases should have reached.

* If not a wheelchair then both the ParaGolfer and Solo Rider fit the statutory definition of “other power-driven mobility device,” which requires only that one purpose of the device be locomotion and that it not be a “wheelchair.” Unfortunately, the regulations concerning other power-driven mobility devices are intended to govern when they must be allowed, not when they must be provided, so this definition isn’t very helpful.

« Credit Union victories in ADA website litigation: an opportunity for all defendants. » Quick Hits – April is the cruelest month edition