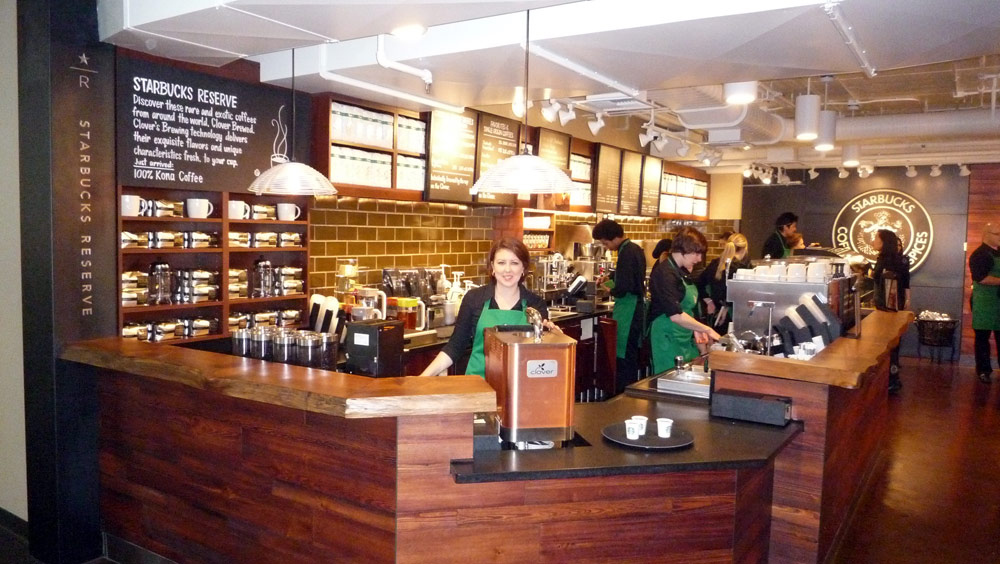 Starbucks has a long history of litigation about the height of its pickup counters.  In 2003 Starbucks settled a claim by a California disabilities rights group concerning the height of its pickup counters. In 2011 Starbucks obtained the dismissal of another pickup counter height lawsuit, Chapman v. Starbucks, 2011 WL 66823 (E.D.Cal. 1022) based on mootness. The counter had been lowered to comply with the ADA requirements. In 2012 Starbucks settled a case that included counter height allegations in the Southern District of Florida. Access 4 All, Inc. v. Starbucks, Case No. 0:11-cv-61010 (S.D. Fla.). The settlement terms do not appear in the record, but most ADA settlements include remediation plus attorney’s fees, so it is a reasonable guess that Starbucks had to lower the counters in the 4 stores at issue. Just a few days ago, on June 5, 2013, a different District Court awarded Robert Cruz some $145,960.07 in attorney’s fees for his successful action against Starbucks concerning one Starbucks store. The Consent Decree in that case called for lowering the pickup counter. Cruz v. Starbucks Corporation, 2013 WL 2447862 (N.D. Cal. 2013) and see Docket 29-1 in the underlying case, 3:10-cv-01868.

Most recently, on June 14, 2013, a District Judge in the Central District of California granted an ADA plaintiff leave to amend to beef up allegations supporting a class action claim attacking the pickup counter height in all of the Starbucks stores in California. Vondersaar v. Starbucks, (Case No. 3:12-cv-5027 in the Central District of California) It remains to be seen whether the Plaintiff will be able to satisfy the District Court’s pleading concerns, but it also seems Starbucks has a long row to hoe before it can put the pickup counter height issue to rest. Even if it ultimately obtains a dismissal of the Vondersaar case, Starbucks will not have established any precedent with respect to counter heights, meaning that more lawsuits will be filed in the future.

These cases illustrate the difficulty and expense of handling ADA litigation without a long-term plan for ADA compliance. An early settlement or dismissal may resolve one case inexpensively, but since no legal precedent is set the next lawsuit may be just around the corner. If it isn’t possible to obtain an early dismissal, the costs of defense will mount at an extraordinary rate, particularly in class actions. ADA violations are like ticking time bombs waiting to go off, and the only sure way to avoid an explosion is to correct them before the next plaintiff comes along. Starbucks may have simply calculated that the delay in the expense of remediation it has obtained by waiting for lawsuits to trigger compliance is worth the cost of defending those lawsuits. Or perhaps it is busy remediating and just hasn’t had time since 2003 to finish the job. Regardless, the counter-height cases demonstrate once again why businesses hoping to avoid litigation should act pre-emptively to identify and correct ADA violations before the litigation bomb explodes.

The Vondersaar case also highlights a trend in ADA litigation. Vondersaar has not only alleged that the pickup counter heights violate the relevant design standards, he has also alleged that the design was part of a policy of discrimination in which Starbucks deliberately followed a common design that violates the ADA. This kind of policy discrimination claim can significantly expand the scope of a lawsuit. An individual plaintiff that visits an individual store has only suffered design based harm in that store, but he may have suffered a policy injury that would allow him to seek relief with respect to every similar store. It goes almost without saying that a written policy based on compliance with ADA standards and a plan for remediation is the best defense to a claim that the defendant has a policy of discrimination.

The message from the Starbucks pickup counter litigation is the same as the message from most significant ADA cases. The best defense is compliance, and the second best defense is a plan for compliance. This doesn’t mean giving up where there is a real issue on what can be achieved or what the ADA requires, but it does mean staying a step ahead of the plaintiffs and their lawyers when it comes to fixing compliance problems. A great defense team and a fortune in legal fees will never buy more than a temporary respite in the ADA litigation battle, while remediation buys a permanent peace.

Thanks to Mark Handler, who brought the Vondersaar case to my attention with his post in the LinkedIn “ADA for Attorneys, Architects and Access Professionals” group. The counter in this picture appears to be lowered to 36″ inches, which complies with the ADA standard.

« Snap Judgment! The ADA requires it, but are you ready? » Pleading ADA defenses: What’s sauce for the goose . . .