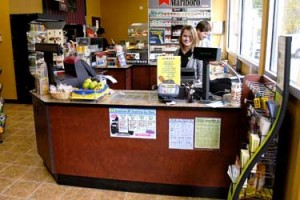 Point of sale merchandising has ADA implications that many retailers overlook. POS devices that are not accessible by the blind are claimed to violate the ADA and have attracted the attention of major disabilities rights groups.* A recent case from California, Johnson v. Lababedy, 2016 WL 4087061 (E.D. Cal. Aug. 2, 2016) serves as a reminder of how more mundane sales efforts also have ADA implications, and that just how the ADA applies may require some careful analysis for both plaintiffs and businesses.

The ADA requires that sales counters be low enough and wide enough so that an individual in a wheelchair can reach the counter either head on or by approaching from the side (See Standard 904.4). This requires a counter at least 30″ wide for a direct approach or 36″ wide for a parallel approach. For most businesses, space not directly devoted to selling something is wasted, and many businesses like to surround their sales counters with impulse items – a last chance to make a few dollars before the consumer leaves. For these retailers a counter that is three feet wide and empty represents nothing but wasted space, and so even when the sales counter is built to ADA standards it may rapidly become covered with displays of gum, candy, and similar items, shrinking the space available for a disabled customer.

In POS Marketing and ADA Compliance – you can’t have it both ways I described a case that treated point of sale displays as architectural barriers. The defendant, Starbucks, argued that its POS displays were “temporary obstructions” and therefore permitted under 28 CFR section 36.211(b). The court rejected the defense, correctly observing that the displays were not there because of maintenance or repairs, but were intended to remain in place indefinitely.**

Johnson v. Lababedy takes a different approach. Instead of treating the POS displays as architectural barriers it looks at them as a policy decision by the business. Here is what the Court says:

This leads, however, to a very different result in terms of the plaintiff’s obligation. The Court continues:

. . . in order to state a claim regarding this clutter, plaintiff must allege that he requested a reasonable modification of the policy and that plaintiff failed make the modification. See Fortyune, 364 F.3d at 1082 (plaintiff must allege that defendants failed “to make a requested reasonable modification that was…necessary to accommodate the plaintiff’s disability”) (emphasis added). There is no such allegation in the complaint.9 Plaintiff is not entitled to default judgment on the “clutter” claim.

Johnson v. Lababedy, 2016 WL 4087061, at *6. In other words, a disabled individual who finds that counter-top displays interfere with his access needs to ask that they be moved before he can state a claim. The displays are not architectural barriers, but the result of a bad policy.

Policy and procedure allegations are very common in ADA lawsuits, usually as a means of defeating a mootness defense. If the defendant removes the architectural barrier or brings its facility into compliance with the ADA Standards the plaintiff will claim that there is still a policy that is likely to cause future ADA violations, thus keeping the case alive so that the plaintiff can settle or claim a victory and win attorneys’ fees. Johnson suggests that in order to sustain a policy based claim the plaintiff must request a reasonable modification of the policy and be denied because policy claims arise under 42 U.S.C. section 12182(b)(2)(A)(ii), concerning refusal to make reasonable modifications.

This presents a defense opportunity for victims of serial litigants. The economics of serial litigation are such that the plaintiff will never take the time to request a reasonable modification – it takes time and that cuts into profits. Johnson suggests that where a serial litigant tries to keep a case alive with a policy and procedure claim the simple answer is – you never asked for a modification. This won’t change the usual economics, which make an early settlement the best route for most cases, but when the plaintiff pushes for too much money, or just won’t quit, Johnson may provide an answer.***

*My earlier blogs The next wave – ADA lawsuits against touchscreen POS devices and You can’t agree to what you can’t read – the perils of clickwrap when the ADA is involved discuss these issues.

** The same issue is discussed in my blogs concerning larger “temporary” displays in The aisles are overflowing – which may violate the ADA, and ADA Policies – you’ve got to walk the walk

*** Policy and procedure claims might be characterized as Section 12182(b)(1)(D) “administrative method” claims, but it is not clear that an individual confronting a chewing gum display would have standing without showing he or she was actually prevented from buying goods and services. Many courts have held that merely seeing an architectural barrier constitutes an injury because such barriers are by definition discriminatory. If a chewing gum display is not an architectural barrier the standing question becomes more difficult.