Risky business – the FHA forbids discrimination based on perceived risk. 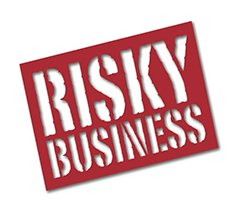 You can’t turn down or evict a handicapped* tenant because renting to him would increase your risk of liability. That is one of the important lessons from the Second Circuit’s June 2 decision in Rodriguez v. Vill. Green Realty, Inc.,  2015 WL 3461554, at *15 (2d Cir. June 2, 2015). If a tenant or prospective tenant is willing to accept some risk caused by his or her handicap the landlord doesn’t get to decide he shouldn’t.

The plaintiffs in Rodriguez had a child who suffered from epilepsy and autism spectrum disorder. They rented a house on a road that was not always well maintained. In a long series of text messages concerning a prospective new owner the family complained about the condition of the road. This lead to a suggestion from the owner’s agent that the house was not suitable for a family like theirs because it wasn’t close to a hospital and might not be easily reached by ambulance. The house didn’t sell, and the plaintiffs were not evicted, but eventually they moved out because they felt unwelcome. They then sued for discrimination under the Fair Housing Act.  The district court granted a summary judgment but the 2nd Circuit reversed and remanded the case for trial.

One of the defenses raised concerned whether child was in fact handicapped. The 2nd Circuit rejected the defense on many grounds, but the most interesting concerned choice of housing as a marker for handicap. The 2nd Circuit first held that: “[t]he ability to obtain shelter is among the most basic of human needs and thus is a “major life activity” for purposes of the FHA.” Under the FHA a handicap exists when an individual has a condition that interferes with a major life activity. It follows that a person is handicapped under the FHA if “she cannot live or is regarded as unable to live in a broad class of housing that would otherwise be accessible to her.” 2015 WL 3461554, at *13 [emphasis added]. In other words, if a landlord believes that because of the tenant’s condition the tenant cannot live in a particular house or apartment then the tenant is “regarded as handicapped” regardless of the condition. In Rodriquez the child was regarded as handicapped because the agent believed people with epilepsy shouldn’t live in places where medical care was hard to obtain. This belief by the owner interfered with the “major life activity” of obtaining shelter.

There are two important lessons here. First, landlords must understand that if a tenant is “regarded as handicapped” then refusing to rent is a violation of the FHA even if the tenant is not really handicapped.  Imagine a tenant who is merely out of shape and overweight who wants to rent a third floor apartment served only by stairs. If the landlord refuses to rent because he is afraid the tenant will have a heart attack climbing the stairs he has violated the FHA even if that fear is objectively unfounded. If you treat a tenant or prospective tenant as if they were disabled then they are protected by the FHA no matter how wrong you are.

The second is that a perceived risk cannot be used to discriminate against a handicapped tenant. It seems clear that the owner and agent believed the Rodriquez family was a risk because the owner would be blamed for the bad road if the child suffered some injury and couldn’t get medical care. Under the FHA as interpreted by the 2nd Circuit only a handicapped tenant is allowed to decide what risks he or she will take. All the landlord can do is make sure his insurance covers the lawsuit that might result later. If the tenant wants to engage in risky business it is the tenant’s concern, not the landlord’s.

*The word “disability” is generally preferred over the word “handicap,” but the Fair Housing Act uses “handicap” and “handicapped.” This blog is about the FHA and so I have used the statutory language. The difference is important as I explained in my earlier blog on the subject.

« Trash talk – ADA problems in the restroom. » Disparate Impact – Will it now apply to disability discrimination under the FHA?