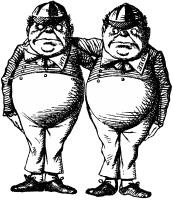 Meet Iqbal and Twombly.* Pleading an ADA case sometimes seems trivially easy. Allege a disability, allege an encouter with an architectural barrier, claim intent to return or deterrence and any plaintiff should be able to at least avoid dismissal. It appears, however, that some courts are taking a harder look at the kind of vague allegations found in the pleadings of many serial plaintiffs. This gives defendants new opportunities for early dismissal.**

In Mark Allison v. Spring Mountain Las Vegas LLC, 2016 WL 4474126, at *3 (D. Nev. Aug. 23, 2016) the plaintiff’s complaint included the usual allegations; he was disabled and that he couldn’t enter the facility in question because of “barriers to access  . . . and ADA violations.” What he did not do was specify the barriers or how they affected him:

Importantly, plaintiff fails to allege what those barriers were and how those barriers affected him so as to deny plaintiff the “full and equal” access that would satisfy the injury in fact requirement—i.e., that plaintiff personally suffered discrimination under the ADA on account of his disability. Therefore, plaintiff’s complaint is jurisdictionally defective as plaintiff has failed to sufficiently allege the elements of standing in the ADA context.

This is a surprising failure for someone like Mr. Allison who has filed a dozen or more ADA lawsuits in the last several years. Of particular interest to defendants is the court’s requirement that Mr. Allison plead “how those barriers affected him.” This suggests a somewhat stricter standard than the usual requirement that the plaintiff have merely confronted or obtained knowledge of a barrier.***  District courts are finally beginning to realize that cheap standing encourages abusive ADA litigation.

He does not allege the type of business that occurs at the “facility,” his past patronage of the facility, the facility’s proximity to his residence or place of business, or why he would intend to visit it again. Allison’s allegations are merely “threadbare recitals” of the elements of an ADA claim, which are insufficient to plausibly show standing under the ADA.

Allison was given leave to re-plead, and will probably do better the second time around, but it is a hopeful sign that district courts recognize that Iqbal and Twombly apply in a civil rights context where plaintiffs have all too often been given a free ride because of the important policy goals of the ADA.

In Jones v. Nat’l R.R. Passenger Corp., 2016 WL 4538367  (N.D. Cal. Aug. 31, 2016) the plaintiff’s failure was to allege her disability with sufficient specificity. The Court found that the pleading standards set out in the Iqbal and Twombly cases required more than a mere allegation that the plaintiff was disabled. It required pleadings: “identifying her alleged disability and facts sufficient to show the disability impairs a major life activity.” There is a little bit of confusion in this sentence because a “disability” is only an “impairment” whhen a major life activity is limited, but it appears the court wanted the plaintiff to specify her impairment and how it limited a major life activity. This is a low barrier for access to the courts, but a barrier nonetheless.

An even more recent decision from Nebraska imposes a similar pleading requirement, and adds a twist concerning accessible parking. In Barfield v. Am. Enter. Properties Nebraska, 2016 WL 4684106, at *3 (D. Neb. Aug. 17, 2016) the Court dismissed an ADA claim because:

The ADA does not require that a person with a disability obtain or carry any kind of proof of his disability; parking stickers for those with disabilities are issued by local governments because local laws require them. However, since a person with a disability risks a fine if he does not comply with local law it makes perfect sense to say that an individual who does not plead possession of a disabled parking pass has not shown any harm from the lack of accessible parking spaces. Without the tag or pass he couldn’t use the accessible parking anyway.

Putting these and other cases together it is clear that for a plaintiff to withstand a motion dismiss the Complaint must:

Many serial plaintiffs will fail to do one or more of these things, at least the first time around. Plaintiffs’ litigation under the ADA is based on a business model in which low margins are made up for a high volume of cases. Being specific takes time and reduces profitability, so plaintiffs’ counsel have become adept at using form complaints that are cut and pasted from prior lawsuits. If District Courts remain willing to enforce the pleading standards in Iqbal and Twombly the “file cheap, settle cheap” model that drives serial litigation may fail because it is no longer possible to file cheap.

* Not really. This is Tweedle Dum and Tweedle Dee from Alice in Wonderland. Iqbal and Twombly are critical cases from the Supreme Court creating a heightened specificity requirement for many lawsuits under federal law.

** This blog is a follow up to my earlier blog, “Cheap Standing, the Courts Push Back” describing other courts that are requiring real standing at the motion to dismiss stage.

« Last week’s news – The ADA lesson business never seems to learn. » ADA and the Internet – what non-internet cases can tell us.