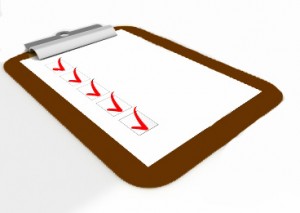 A pair of recent cases, both brought by the same law firm on behalf of different plaintiffs, underscore the importance for every business of having policies and procedures for both ADA compliance and maintenance. This is especially important for businesses with multiple stores because a policy and procedure class action will elevate a single bad parking space to a nationwide class action, making both remediation and settlement or remediation very expensive.*

In Mellenthin the defense relied primarily on res judicata and collateral estoppel based on earlier class action consent decree that required ADA compliance at some, but not all of the defendant’s stores. The court rejected this defense because the existing consent decree did not include any requirement that policies and procedures for maintaining ADA compliance be in place. This meant the earlier decree simply didn’t include the claims in the new case.

In Hernandez the defendants argued that the plaintiff, who had visited only a single store, could not leverage that claim into a nationwide class action. Here the policy and procedure claim demonstrated its real power. By claiming he was a victim not just of the particular barriers he encountered at one store but also a victim of a missing policy, the plaintiff was able to show that his claims applied to every store in the United States. The opinion also helps understand why a maintenance policy is just as important as a construction policy. The evidence was that the defendant had a policy to insure that all new construction met ADA requirements, but had no policy to review continued compliance over the 15 to 20 year life of a parking lot. What the ADA requires in terms of maintenance is not an issue that the courts have resolved, but that only meant there was a common issue of law that justified the class action. Relying on an argument about the legal requirements of the ADA is a sure way to spend a lot of money on lawyers.

These cases were filed by a sophisticated plaintiff’s firm that often uses class action allegations based on policies and procedures to create a case that can be defended only at great expense and for which the risk of liability is large. The best way to avoid or defend such cases is to have and enforce a policy to insure ADA compliance in new construction and to insure continued ADA compliance on a reasonable basis. This is not guarantee that you won’t be sued, but it will reduce the risk of the kind of class action that allows a single plaintiff to turn one bad parking space into a class action involving every facility a defendant owns.