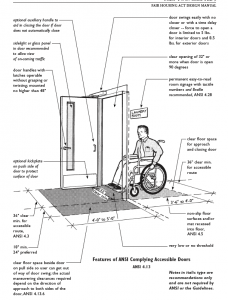 The decision in Miami Valley Fair Hous. Ctr., Inc. v. Preferred Living Real Est. Investments, LLC, 2018 WL 4690790 (S.D. Ohio Sept. 28, 2018) has the potential to create a significant change in how FHA design/build cases are litigated. It also provides litigants with a treatise on the most important evidentiary issues faced by both plaintiffs and defendants. The critical take-away for apartment owners and developers is that proof of deviations from the various FHA safe harbors is not conclusive evidence of an FHA violation. That means defendants who own or build apartments that are accessible but have technical deviations from FHA design/build safe harbors will be given the chance to talk about what matters to the disabled, that is, accessibility.

The Court began its analysis with the self-evident fact that:

“the Guidelines are neither mandatory nor prescribe specific requirements which, if not met, would constitute unlawful discrimination.”

This is inherent in the fact that the safe harbors are “a shield rather than a sword.” In a footnote, the Court also rejected a “burden shifting” analysis in which evidence of non-compliance is sufficient to establish a prima facie case unless it is rebutted. The Court’s conclusion is that discrepancies from the FHA safe harbors are sufficient to raise a fact issue for trial (no defense summary judgment) but not sufficient to establish an FHA violation as a matter of law (no plaintiff summary judgment).

This would be a terrific victory for defendants except that the Court hedged its bets with the observation that in this case there was rebuttal evidence with respect to “each of the FHAA violations” in the plaintiff’s motion for summary judgment. This leaves open the possibility that the Court would grant a summary judgment based solely on safe harbor discrepancies in the absence of rebuttal evidence. However, there is good news in the kind of evidence the Court found sufficient to raise a fact issue.

After rejecting the defense claim that mere proof of discrepancies is no evidence of a violation, the Court considered the defendants’ claim that its presumptive compliance with local accessibility laws establishes FHA compliance as a matter of law, an argument based on the decision in United States v. Mid-America Apartment Comms., Inc., 247 F. Supp. 3d 30, 36 (D.D.C. Mar. 27, 2017).* The court rejected this as defense only because the Court found there was an unresolved fact issue concerning whether the local code incorporated the FHA requirements. Implicit in this holding is the idea that proof of compliance with local codes that clearly incorporate one of the FHA safe harbors is sufficient both to defeat a plaintiff motion for summary judgment that is based only on safe harbor discrepancies.

The next good news for defendants is the Court’s acceptance of two expert reports offered by the defense. One was an expert who did not visit the apartments but instead criticized the methodology used by the plaintiff’s expert when measuring slopes. The expert found two flaws in the expert’s measurements. First, the plaintiff’s expert used a two foot digital level to obtain individual slope measurements rather than measuring the rise divided by the run over some length of sidewalk. Second, the plaintiff’s expert did not take into account the possibility that sidewalk slopes had changed due to settling and might not reflect conditions when the apartments were built. Similar criticisms can be made in every FHA design/build case because use of a two foot level to take scattered local measurements is standard procedure for most plaintiff’s experts. Plaintiffs typically rely on finding a few places where a single measurement shows an excessive slope and then seek summary judgment. If this approach is not sufficient for summary judgment the defense will have an opportunity to show a jury why spot measurements do not justify finding an FHA violation.

The other defense expert, Paul Sheriff, was himself a disabled individual who performed site “roll-throughs” using a specially designed wheelchair. Mr. Sheriff is deceased, but his approach could be used in any case. It appears he did not take hundreds of measurements to prove or disprove compliance with a safe harbor, but rather evaluated the accessibility of the apartment complex as a whole. This approach, if accepted, eliminates the ability of plaintiffs to obtain summary judgment based on isolated technical discrepancies without considering whether the apartment complex is in fact accessible to those with disabilities. It implicitly rejects decisions that elevate technical perfection over actual accessibility.

There was some bad news for the defendants. The Court refused to grant summary judgment based on limitations for one of several apartment complexes, finding there was a fact issue as to whether the common ownership and management with other complexes created a continuing violation. The Court also refused to grant summary judgment for related entities that had some involvement in the design and construction of the apartments even though they did not technically do either. The bottom line decision for both sides was that they would be going to trial.

This may not sound like good news. Good news for the defendant in accessibility litigation usually means summary disposition. For most ADA cases if the case cannot be resolved in its earliest stages the costs of defense are likely to exceed the cost of remediation. For FHA failure to accommodate cases the same is true. FHA cases based on design/build violations are different. If an apartment complex has dozens of similar units it is likely that a safe harbor discrepancy in one will be repeated in all of them. If there are hundreds of feet of sidewalks the work needed to make every inch of every sidewalk comply with safe harbor slope requirements will be substantial. When the cost of remediation is high, the costs of defense become more reasonable. This is especially true when the plaintiff is relying on hyper-technical discrepancies – a door that is 1/8″ too narrow or a sidewalk with a slope that is 1/2% too steep. A Court willing to consider the reality of accessibility rather than a set of tiny discrepancies will be less inclined to order remediation of supposed violations that don’t have any real impact on those with disabilities. That means spending money on legal fees can actually reduce or even eliminate the cost of remediation.

Unfortunately, in many courts FHA design/build litigation has become a numbers game in which the only real beneficiaries are the lawyers. The focus in Miami Valley on meaningful determinations of accessibility puts the emphasis where it should have been all along, on determining what is and is not accessible.