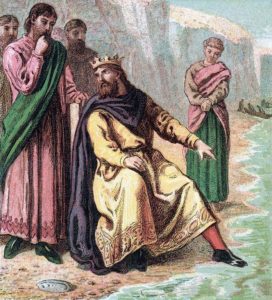 Can the 11th Circuit hold back the tide as King  Cnut famously failed to do?² In Laufer v. Arpan LLC, 2022 WL 906511 (11th Cir. Mar. 29, 2022) the 11th Circuit disagreed with the Fifth, Tenth and Second Circuits concerning the injury sufficient to satisfy the standing requirements in Article III of the Constitution. If the case goes to the Supreme Court the 11th Circuit is likely to get its feet wet on Article III standing, but of more interest is the Court’s failure to consider whether the plaintiff had even suffered a statutory injury; that is, did she suffer the kind of injury Title III of the ADA was intended to prevent? If there was no statutory injury then the question of constitutional injury never arises.

The lawsuit was typical of the thousands filed by Laufer. She admitted that she visited a hotel website with no intention of visiting the hotel but instead to see if it met DOJ regulations concerning information about accessibility features. When she found something missing she sued, claiming that this violation of the ADA caused her humiliation and embarrassment. That humiliation and embarrassment was her only injury. She never intended to visit the hotel so the absence of information did not deprive her of any opportunity to stay at the hotel or enjoy any of its goods and services.

This is where qustion of statutory injury comes in. There is very good evidence that Congress never intended Title III of the ADA to protect individuals with disabilities from humiliation and embarrassment. To see why it is useful to make the same comparison the 11th Circuit made when it considered that damages for emotional distress were available under Section 504 of the Rehabilitation Act, another disability discrimination statute. Section 504 explicitly permits the recovery of damages, with damages for emotional distress being only one kind of damages that may be awarded. Such damages are also available to victims of discrimination under the Fair Housing Act and under Titles I and II of the ADA. They are not, however, available under Title III of the ADA. Congress deliberately chose to exclude from Title III of the ADA any kind of damage remedy.

The absence of any damage remedy at all shows that emotional injuries like humiliation and embarassment are not injuries that Title III is intended to prevent. Title III only allows injunctive relief because its purpose is to prevent the denial of the “full and equal enjoyment of the goods, services, facilities, privileges, advantages, or accommodations of any place of public accommodation.” It was never intended to prevent bad feelings that might result from being aware of an ADA violation. No matter how bad a discriminatory website or other condition makes a disabled person feel, unless it denies them the full and equal enjoyment of the public accommodation then it has not injured them in the way the statute is intended to prevent, and that is the only kind of injury that gives rise to standing. Because Laufer never suffered a Title III statutory injury she had no standing to sue under Title III regardless of any constitutional considerations.¹

However, even if Title III granted a remedy for emotional distress, Laufer’s alleged distress would not satisfy the requirements of the Constitution. The 11th Circuit’s error is found in two sentences from the opinion:

Because she claims not only that she suffered illegal discrimination but also that the discrimination resulted in “frustration and humiliation” and a “sense of isolation and segregation,” she has adequately pleaded a concrete stigmatic injury. And because her emotional injury is her emotional injury, it affects her “in a personal and individual way” and is therefore sufficiently particularized

2022 WL 906511, at *4. The key word here is “stigmatic.” A stigmatic injury is an injury that one suffers  because one is a member of some group. The injury itself is by definition neither personal nor individual because every member of the group would suffer the same injury under the same circumstances.  All that is personal to Laufer or another member of the group who suffers a stigmatic injury is the degree of harm – how bad they feel – rather than the nature of the injury.

Allen v. Wright, a case the 11th Circuit refers to but does not seem to understand explains why a stigmatic injury, though real, does not satisfy the requirements for constitutional standing.

Our cases make clear, however, that such injury accords a basis for standing only to “those persons who are personally denied equal treatment” by the challenged discriminatory conduct.

If the abstract stigmatic injury were cognizable, standing  would extend nationwide to all members of the particular racial groups against which the Government was alleged to be discriminating . . . All such persons could claim the same sort of abstract stigmatic injury respondents assert in their first claim of injury. A black person in Hawaii could challenge the grant of a tax exemption to a racially discriminatory school in Maine.

What Laufer really alleges and what the 11th Circuit mistakenly relies on is what the Supreme Court calls the “offended observer” theory of standing;  See, Am. Legion v. Am. Humanist Assn., 139 S. Ct. 2067 (2019) [Gorsuch and Thomas concurring]. This notion of standing has been rejected by the Supreme Court because:

The federal courts have abjured appeals to their authority which would convert the judicial process into “no more than a vehicle for the vindication of the value interests of concerned bystanders.”

United States v. SCRAP, 412 U.S. 669, 687, 93 S.Ct. 2405, 2416, 37 L.Ed.2d 254 (1973). Laufer is a concerned bystander. She is disabled, just as the plaintiffs in Allen v Wright were black, but like them she has never been denied equal treatment; that is, equal access to goods and services. Without a desire to take advantage of the goods and services of a public accommodation a plaintiff like Laufer will never suffer the kind of individual injury required to satisfy Article III.

Laufer v. Arpan cannot be squared with the Fifth Circuit’s decision in Laufer v. Mann Hosp., L.L.C., 996 F.3d 269 (5th Cir. 2021), the Tenth Circuit’s decision in Laufer v. Looper, 22 F.4th 871, 877–78 (10th Cir. 2022) or the Second Circuit’s decision in Harty v. W. Point Realty, Inc., 28 F.4th 435 (2d Cir. 2022). Each of these makes slightly different arguments concerning tester standing as the courts look back to their own earlier precedents, but at the end of the day these cases all correctly reject the notion that a stigmatic injury without unequal treatment is sufficient for Article III standing.  There is a clear conflict among the circuits as my colleague Bill Goren has pointed out, and one of these cases should make it to the Supreme Court, which will have the opportunity to put a stake in the heart of industrial litigation under the ADA by doing no more than requiring that ADA Title III plaintiffs allege and prove more than a mere stigmatic injury.

+++++++++++++++++++++++++++++++++++++
¹Many courts hold that a person with a disability suffers an injury if they merely confront or become aware of a discriminatory condition. These decisions ultimately rest on the notion that the person who confronted the condition was thereby deterred or prevented from taking advantage of the offered goods and services.
² King Cnut (or Canute or Knut) was supposedly annoyed by the flattery of his courtiers concerning his own power as King. To show them that their flattery was vain and did not impress him he had  his throne set by the sea and then commanded the tide, to no avail, to not get his feet wet.

« DOJ Guidance on Website Accessibility and the ADA – it still could be worse » Industrial ADA litigation – “roll me baby, just like a tumbling dice.”