Segway or the Highway Says the DOJ 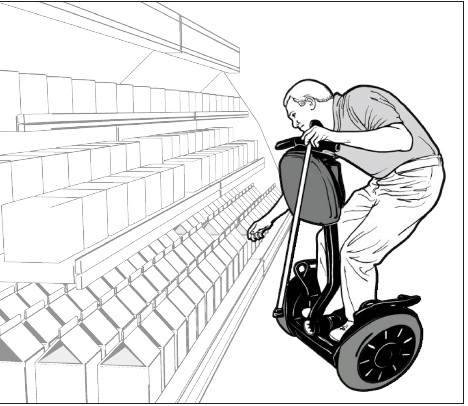 On January 31 of this year the Department of Justice published a new guidance (www.ada.gov/opdmd.pdf) on the use of mobility devices other than wheelchairs. Business owners cannot avoid paying attention to the guidance despite the fact that the DOJ has taken a position that is diametrically opposed to the existing judicial decisions regarding Segways as well as a class action settlement involving Segways at Disney theme parks. As is too often the case the guidelines invite litigation by requiring that businesses do more than is possible when trying to decide how to accommodate disabled visitors.

This guidance appears to be a reaction to several lawsuits that reached results DOJ did not like. The largest in scope was Ault v. Walt Disney World Co., 692 F.3d 1212 (11th Cir. 2012). In Ault the 11th Circuit approved a class action settlement in which Walt Disney World was allowed to ban 2 wheeled devices, including Segways, from use in its theme parks. The suit was brought under the ADA by a guest with a mobility impairment who wanted to use her Segway because she was unable to walk the distances required at the theme park. The settlement allowed Disney to continuing banning Segways, even for those with mobility impairments, in exchange for a promise to develop a 4 wheeled stand up vehicle. The settlement was approved in part because the District Court found that safety concerns were such that the plaintiffs were unlikely to prevail at trial.

The Department of Justice was among a group of objectors to the settlement. The DOJ’s regulations concerning mobility devices (28 CFR 36.311) were promulgated during the litigation, and the DOJ claimed that these regulations made it more likely the plaintiffs would prevail at trial. The District Court disagreed, in essence finding that the DOJ was wrong in its analysis of the safety risks of using the Segway in a crowded theme park.

The second lawsuit was Baughman v. Walt Disney World Co., 217 Cal.App.4th 1438 (2013). In that case the California Court of Appeals found that there was no violation of the ADA when Disney forbade the use of the plaintiff’s Segway. Once again the issue was safety, with the Court agreeing that the device was simply too dangerous for use in a theme park. A third case, also brought by Baughman in federal court in California was dismissed based on the class action settlement in the 11th Circuit case.  In two of other decisions involving Segways and the ADA, the courts agreed that because of safety concerns at least some limits on Segway use are appropriate in public accommodations. See, McElroy v. Simon Prop. Grp., Inc.,  2008 WL 4277716 (D. Kan. 2008) [plaintiff could be required to sign a registration and safety form], Komperda v. Hilton Hawaiian Vill., LLC,  2010 WL 4386758 (D. Haw. 2010) [plaintiff lost his ADA claim after a jury trial].

It appears, based on these cases, that everyone but the Department of Justice understands that Segways are simply too dangerous for use in crowded public areas. Despite this the new DOJ guidance insists that “devices such as Segways® can be accommodated in most circumstances,” pointedly giving theme parks as an example where Segway use should be accommodated. Armed with this guidance there is little doubt that Segway litigation will continue as disabled users claim they should be allowed to go anywhere their machine can fit, regardless of the danger to others.

What can a business do? The DOJ guidance is almost useless when it comes to answering this question, for it requires every business to formulate a policy covering all power driven mobility devices (OPDMD’s in DOJ jargon) based on five “assessment factors” that cannot be objectively measured. Businesses are allowed to develop rules, but exactly what rules are permissible remains vague. Businesses are also allowed to require “credible assurance” that the individual has a disability requiring use of the Segway, but “credible assurance” includes the user just claiming to be disabled and need the Segway. This means, in effect, that anyone who is willing to lie will be able to take a Segway into almost any public accommodation despite the fact that courts and experts agree that it is unreasonably dangerous to allow this.

Of course this isn’t just about Segways. Electric golf carts fall into the same category, and based on the DOJ’s definition the guidance would also apply to electric scooters and skateboards of all kinds. The DOJ’s position is that every disabled person is entitled to decide what device best helps him or her on a purely subjective basis, and there are no objective criteria a business can rely on to determine which devices are too dangerous to others to be excluded. Businesses are left to balance the likely costs of a personal injury lawsuit resulting from inadequate control of a Segway or other OPDMD against the cost of defending an ADA lawsuit supported by the DOJ. While it will certainly be worthwhile for businesses to pay experts to develop a policy based on the DOJ guidance, in the end, as is too often the case, the primary beneficiaries of the ADA will be experts and lawyers.