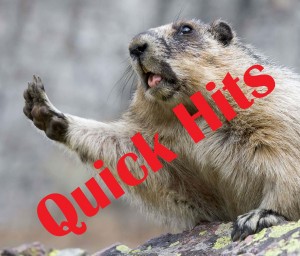 It looks like six more weeks of winter based on the reaction of Punxsutawney Phil to the long shadow he casts over weather forecasting. The last week of ADA decisions seems to confirm that it will remain chilly for businesses as well.

If Punxsutawney Phil had seen Robles v. Yum! Brands, Inc., 2018 WL 566781 (C.D. Cal. Jan. 24, 2018) when he popped out of his hole on Groundhog Day he probably would have just given up and stayed inside for the rest of the year. Robles is another web accessibility case in which the district court simultaneously refuses to say just what an accessible website is and requires the defendant to build one. In other words, no summary judgment is possible and the defendant faces an expensive legal battle after which it may be ordered to do something impossible or, worse still, ordered to do something so ill-defined that it will lead to an endless argument about compliance. We discussed this in more detail in our earlier blog “What is an ADA accessible website? Well, it’s complicated.“

Despite this, businesses can learn something from the case. The defendant, Pizza Hut, tried to accommodate users who found the website inaccessible by providing a phone number that could be called to get the same service. This should be a reasonable way to avoid the problems that may arise when there are temporary problems or because the particular user’s screen reader software is non-standard or defective. The Court found there were fact issues about whether the phone number provided an adequate alternative. It was influenced, no doubt, by the plaintiff’s claim that when he called he was put on hold for 45 minutes. A business that wants to use a phone number as an alternative to web access needs to make sure it is adequately staffed. The whole point of on-line ordering is that it is practically instantaneous, and it will be hard to argue the phone is equivalent if customers are put on hold.

Haynes v. Panda Express, Inc.  2018 WL 538698 (S.D. Fla. Jan. 24, 2018) is one of several recent cases in which the plaintiff sued a defendant that had already entered into a settlement agreement in which it agreed to make its website accessible. In Florida, at least, the federal courts seem willing to dismiss such copy-cat cases as moot. We have noted before that this has not been the universal response to this kind of mootness argument.*** One question for legal scholars will be whether the different approaches being taken by federal courts in Florida are more reflective of a new approach to the legal issues or a distaste for the tactics of this particularly aggressive serial plaintiff.

Arrington v. National Railroad Passenger Corporation, 2018 WL 636009 (3d Cir. Jan. 31, 2018) is a helpful case that should remind lower courts that a disability is more than an inconvenient impairment. The plaintiff had various orthopedic problems and walked with a cane “when she was having problems”, but testified that she “independently pursued a wide range of daily activities.” The Court found she had not established that she was substantially limited in any major life activity because, “at the time of the incident, she could do everything on her own.” It seems likely that had Ms. Arrington testified she could not walk without a cane the Court would have found she was substantially limited in the major life activity of walking. Needing a cane only sometimes, however, was not enough given the activities she routinely pursued. Remembering that a disability requires both an impairment and a significant limitation on a major life activity will help defendants confronted with supposed conditions like anxiety, depression or PTSD that are not, in their milder forms, disabilities.

Bedford v. State of Michigan, 2018 WL 618479 (6th Cir. Jan. 30, 2018) is one of those cases in which one wishes the Court had skipped its theoretical discussion of disability to focus on the basis for its ruling. The plaintiff claimed to suffer from disabling stress that was triggered by litigation and demanded that she get various special accommodations in her divorce proceedings as a result. The Court’s holding was that she failed to prove she had been denied any reasonable accommodation; therefore whether or not she was disabled was irrelevant. Unfortunately, on the way to this result the Court decided that it would not rule on whether the plaintiff was disabled. She alleged that her mental impairment was “largely invisible” because she would “appear to be functional even when she was not.” Her problem, she claimed, was that in a non-supportive environment she had trouble concentrating and thought more slowly. She also claimed that the stress of litigation interfered with her sleep. In other words, “nobody can tell I’m disabled but me, so you can’t prove I’m not disabled and you have to give me special treatment.”

If this is a disability, then only a few people with superhuman responses to stress are not disabled. Everybody thinks better and and expresses themselves more clearly in warm, supportive environments, and everybody performs worse when in stressful or difficult situations. Almost everyone has trouble sleeping during times of crisis and individuals going through a divorce frequently need therapy and a prescription for a sleep aid of some kind. With training lawyers become used to the courtroom and are not affected by litigation, but every lawyer I know was scared to death during his or her first trial and made mistakes that they would never have made under different circumstances.  I once thought that the growth in the number of disabled individuals would be driven by an aging population and increased obesity.** Now it appears that the most important “disabilities” in the future may be nothing more than normal responses to the ordinary difficulties of daily life.

Magee v. Winn-Dixie Stores, Inc., 2018 WL 501525 (E.D. La. Jan. 22, 2018) is an interesting case on standing because the plaintiff’s inability to provide evidence of standing suggests that the original complaint contained outright falsehoods. Magee is a serial plaintiff who often levels his attacks on machines rather than buildings. In Magee v. Coca Cola the Supreme Court famously rejected his claim that a vending machine was a place of public accommodation.† This most recent case is an attack on water vending machines located outside of grocery stores, and is similar in many ways to Magee’s effort in an earlier case, Magee v. Glacier Water Services, Inc., 2017 WL 396287, at *1 (E.D. La. Jan. 30, 2017). In both cases Magee, who has a vision impairment, claimed he was unable to use a water dispensing machine because it lacked the necessary braille markings.

Both cases were dismissed when the defendants presented evidence that the allegations in the Complaint were simply false. In the Glacier Water Services case Magee alleged an attempt to use the machine located outside the store when the store was closed. Security camera footage from the date of the supposed attempt proved that neither Magee nor any other pedestrian had approached the machine during the night. Magee could not provide any specific rebuttal and the case was dismissed. In Winn-Dixie the defendant provided evidence that the machine had braille markings on the day Magee supposedly visited by providing affidavits of the date the markings were installed before that date and were in place after that date. Magee’s response was an affidavit stating he visited the store before the date of installation, but without any details. The Court found Magee had failed to meet his burden of showing the allegations in his petition, which insisted there were no markings on the date of his visit, were plausible.

It is impossible to tell whether these cases could have settled for less than the cost of defense, which is usually the case in serial filer lawsuits. They illustrate, however, that dubious claims by dubious plaintiffs can be defeated when the defendant is sufficiently determined to gather evidence regarding the supposed violation, at least in the Eastern District of Louisiana.

† See our earlier blog “Kiosks, Coca Cola and the ADA – What is a public accommodation anyway?”

« Does motive matter in an ADA case? Sometimes. » ADA Standing – A real limit on cheap standing for serial filers.